I must admit, I never thought of Vienna as a wine-producing region. Certainly one of luscious pastries and exquisite coffees, but not wines. Nor did I see any vineyards or wineries when I was there, notably in the 1980s, which of course is 40 years ago. Things change in 40 years, don't they? There are about 400 individual vineyards in the city, covering some 700 hectares.

Their production figures are pretty staggering. The annual yield of wine in Vienna averages 20,000 hectolitres. And all of the wine is sold for immediate consumption locally in the popular wine taverns called Heuriger.

What a curious model. I wonder how I missed that when I was there. Oh well, it was a business trip, I was very young, and I didn't speak German.

Posted by Daria Blackwell at 18:03 No comments: 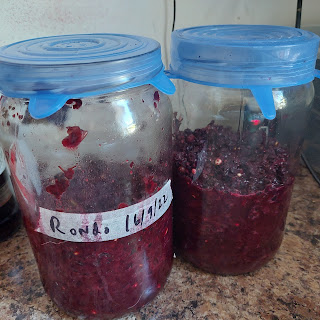 We processed the grapes by hand and got half a bowl of white and a big pot full of red. They were delicious by the way!

We crushed the grapes with the Mouli and got a glass full of green juice from the Solaris, which we drank. We got a jar full of must from the Rondo which Alex topped off with a little water and some yeast dissolved in 3/4 cup of boiled lukewarm water. The must is thick and we couldn't put it in a 5L demijohn, so we used my 2L apple cider vinegar jar and it promptly overflowed overnight. We then spilt it into two jars with plastic pull-on lids which let the air escape.

The only good news is that the Brix measurement by reflectometer is precisely 20. 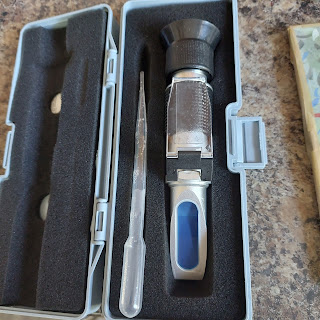 How do farmers do it year after year?

Posted by Daria Blackwell at 13:44 No comments:

Email ThisBlogThis!Share to TwitterShare to FacebookShare to Pinterest
Labels: Brix, must, Rondo, Solaris

We couldn't harvest yesterday because Alex had to show Ross House with little notice. We had a lot of commitments this week, and I hadn't looked at the grapes in two days. I thought it would give more of them a chance to reach a brix of 20 as they were hovering around 19 three days ago.

When we started picking the Rondo this morning, it quickly became apparent that we'd had a crop failure. Without rain for so long, in those two days, most of them turned into raisins.  I was gutted. We only had a few good bunches. Very tasty, but hardly enough for a bottle or two.

Meanwhile, the Solaris also reached veraison. We picked what was there -- so little for the number of vines -- but our yield was barely half a bucket. Lots of hens and chicks but really tasty and sweet. Most were from the younger vines not the older ones. I just don't understand what went wrong. There was no early frost or major storms. 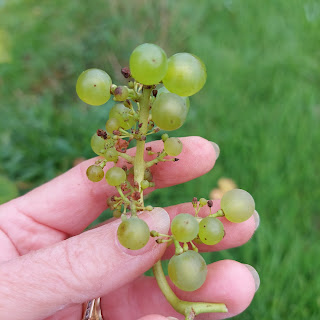 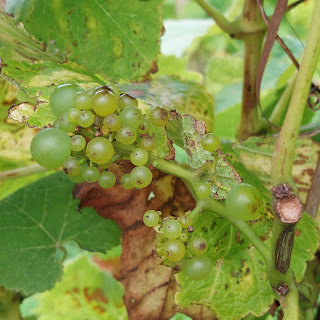 You can see the damage to the foliage caused by the drought. The only good news is that the birds didn't eat all of the grapes. Our strategies must have worked: 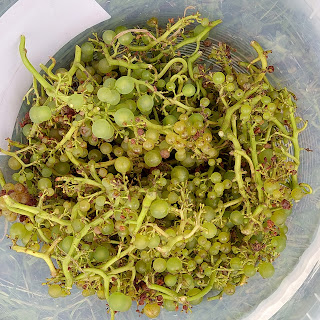 Curiously, some of the vines are flowering again. They are really confused by this late warmth and sunshine. 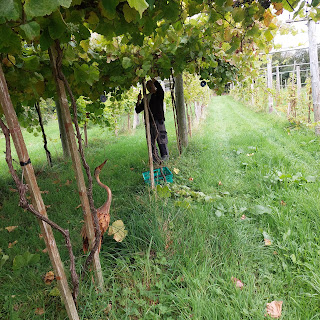 Farming during anthropogenic climate weirdness is going to be a challenge.

Posted by Daria Blackwell at 15:20 No comments: 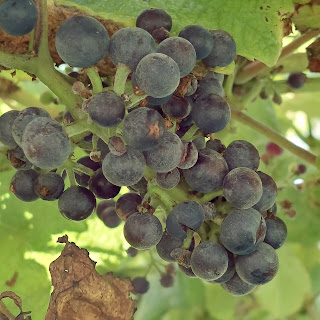 The Brix reading for the Rondo clusters tested ranged from 19 to 22, with 20 being ideal for reds. It will be time to harvest in the next day or so. We'll end up with two harvests again as some of the bunches have not started turning yet.

The Solaris tested at 15 so it has a way to go. The Chardonnay is not close yet but the Pint Noir has started veraison. Very interesting. The leaves on the vines are turning brown and dropping as the heat and lack of rain continue.

We are tracking hurricanes, Danielle and Earl, in fear of potential arrival here this coming weekend and next. Danielle has just been downgraded to a tropical storm but two new depressions have formed off the Cape Verdes with a high likelihood of strengthening. 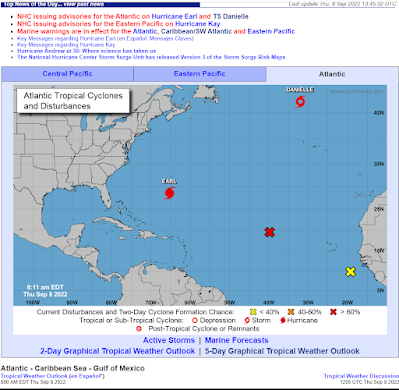 Posted by Daria Blackwell at 15:01 No comments:

I finally managed to get the account up on Instagram. I really should have had a ten-year-old do it. Would have been much faster and easier and done professionally. It took me the entire morning and lots of revisions. I almost deleted the account and started over, but it would take a month for it to be deleted. So I persevered.

This is a QR code that will get you to the page easily they say. First I need to populate it with content. And I cannot get dlvr.it to work. Pshaw! 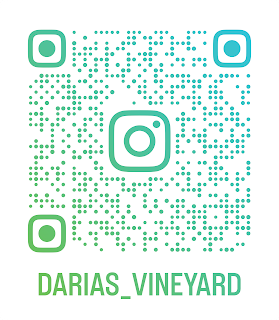 Posted by Daria Blackwell at 12:07 No comments:

An interesting article in Decanter profiles a vine nursery in Spain that is growing grape varietals grafted onto tall rootstock vines to elevate them high off the ground. It looks to like they form palm-tree-like tall vines. The article also talks about the overhead trellises used in Galicia.

They claim that the roots of any vine top out at 37 cm. This newly planted unique vineyard has trunks at 80cm in height. They claim many benefits including: ‘…better resistance to drought, faster forming of the vines in trellises, keeping fruit away from animals that would eat it, not needing trunk protectors when cleaning up vegetative growth and eliminating excess secondary shoots.’

In earlier experiments, they found that height did indeed make a difference with 90cm vines pushing out maturation by four days over those at 60cm. They also have lower planting density. We've done all this by instinct. How curious!

I would think that taller vines would lead to deeper roots and less need for water, more resilience to drought. As they have just planted the vineyard in 2022, it will be a few years before we see the real results in yield and quality. We'll have to see.

Posted by Daria Blackwell at 12:25 No comments:

Viticulture is not always an environmentally friendly proposition. There’s been more focus recently on making wine production less energy intensive, sustainable and environmentally responsible. There has been a movement to reduce fuel, water and nutrient consumption in the vineyard by introducing sustainable biodynamic practices. In the winery, efforts are underway to reduce fuel and electricity consumption, to find more environmentally friendly packaging, and improve the carbon footprint of transport.
Glass bottles are heavy, take a lot of energy to produce and use a lot a fuel to transport. They are also not recycled or reused as often as they should be. So, many people are looking at alternatives, including natural fibers like hemp, corrugated and paper with food-safe PET liners. That doesn't sound terribly good for the environment either. Yes, they are much lighter than glass and would save a lot of costs on transport.
Garçon Wines’ Eco Flat bottle is made from recycled PET and their Flaca wine is shipped in a box that is shaped to fit in a letterbox for gift giving. Seems like a lot of waste to me, but at least it's all recyclable. 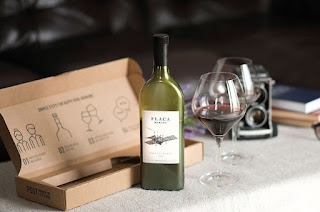 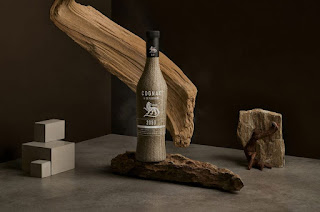 My goal will be to make our wine bottles fully reusable, with labels that can be very easily removed. In fact, our production will be small enough to remain local so that we don't ship far and wide, we promote the local economy, and customers return the bottle to our site for refill. Kind of like milk bottles were in my childhood. I like that idea. Of course, it has to be good wine for customers to come back.

Posted by Daria Blackwell at 15:24 No comments:

An indispensible guide to the west of Ireland